We worked as volunteers on Kruistementvlei Farm on top of Piketberg Mountain (called Piket-Bo-Berg) for three weeks this March, and it was wonderful. We did all sorts of different jobs on the farm, from improving a hiking trail to picking almonds to website designing, and with our trusty project manager mom to keep it all together (and 'oom' Jeremy to shake up her plans now and then), our stay was satisfactory and fun. Thank you 'oom' Jeremy and 'tannie' Riette Bryant for your hospitality!

Our first task was to help with the Farmers Market held at Kruistementvlei Farm every month. With a live local band in the background, the setting is very relaxed and more about the 'kuier' than anything else. Mom had a stall for her books, I helped at tannie Riette's stall, and the boys very enthusiastically sold their own 'organic firelighters', made from 'slangbos' and kindling the previous day. 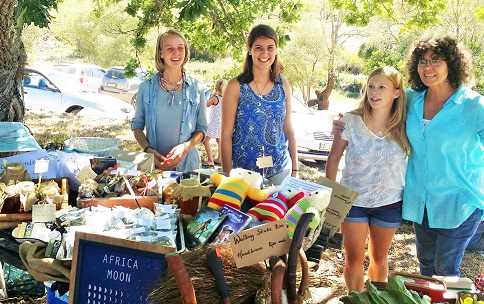 The 'slangbos' contains a lot of oil, thus it makes a good fire starter. 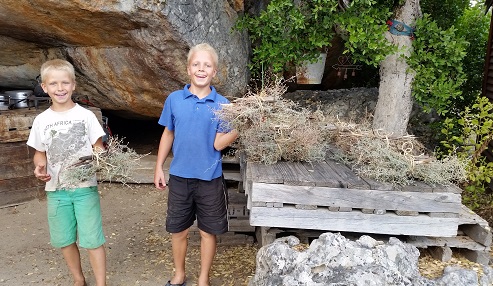 We improved a short hiking trail around their farm, designed a new map and made signposts for the different cottages and features around the farm. 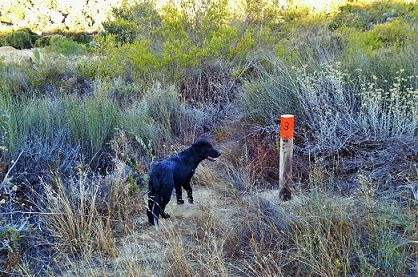 Dad learned to rout (here he's making a sign for the 'Hog House', a quaint open plan cottage where we stayed most of the time). 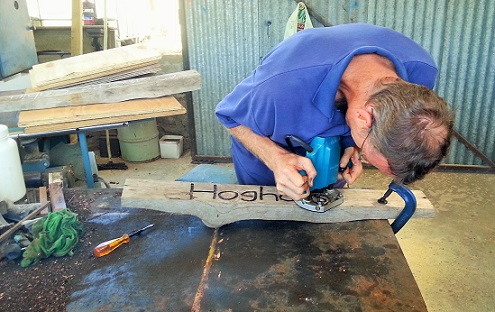 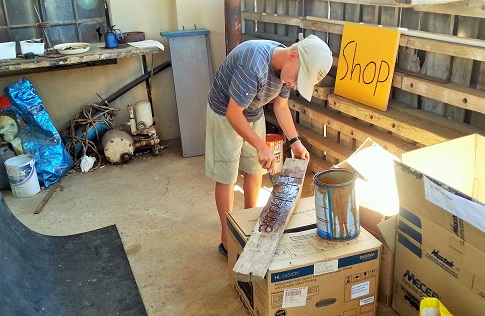 Some of the boards also had to be painted. 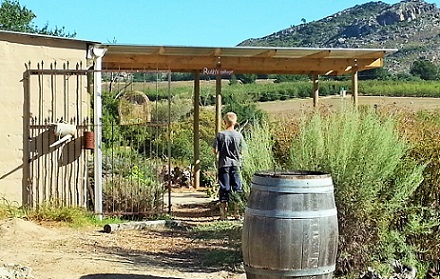 I designed a new logo for the farm, which had to replace the current one on some boards. Here Maarten is putting the new logo up with the stapler gun. 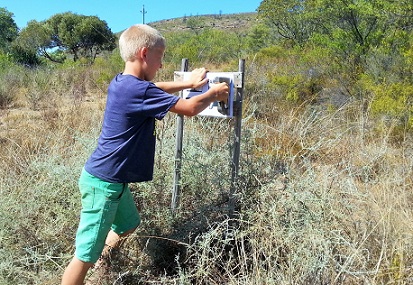 We learned a lot from the Bryants, especially from oom Jeremy about soil and soil improvement. They not only walk their talk, but also involve visitors to the farm in the process. By using dry compost toilets, they make compost and return it to the soil instead of polluting their groundwater (which basically every other kind of toilet does, according to The Humanure Handbook, a very interesting read if you ever have time).

Words like 'permaculture', 'hugelkultur' and 'swales' feature here, and during our stay we even worked on artificial swales. We were made aware of movements like The Urban Farming Guys, and watched some very interesting documentaries such as The Man Who Stopped the Desert.

Oom Jeremy is also a big fan of mulching, and have multiple chippers (mulching machines) on the farm. The boys enjoyed it immensely.


Working on the swales. Swales are basically low tracts of land and are designed to manage water runoff, filter pollutants, and increase rainwater infiltration. We layered it with cardboard (to soak up water), and then filled it up with wood and organic material. 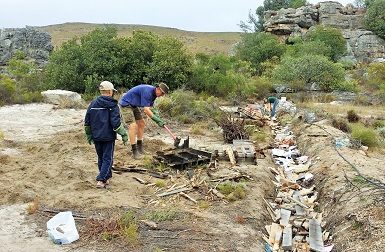 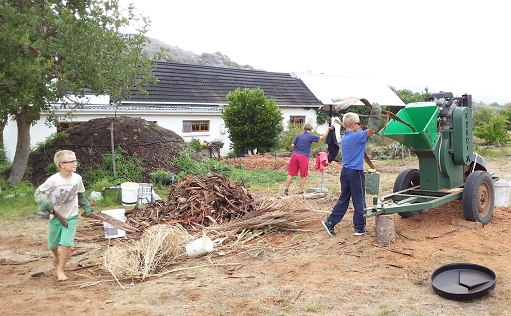 The big chipper in action. It's literally chewing up the whole branch. 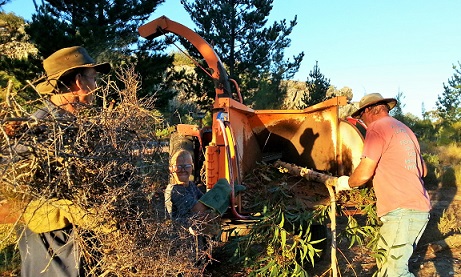 Notice the spray of mulch at the back. 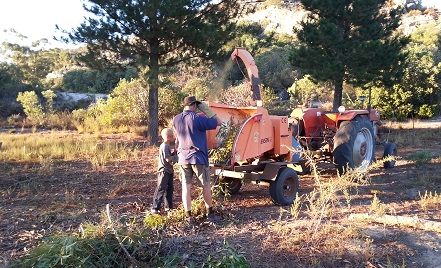 Mom and the boys helped out at the weekly library, where all the local children can come and take out books, practice reading skills, play games, and even have a recorder lesson. 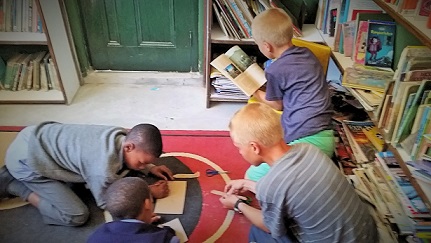 Sorting out the puzzles involved a lot of, well, building puzzles. 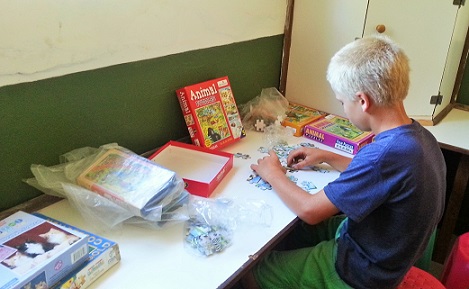 Two other projects were the making of a small garden, and the harvesting of the almonds. We redid one of the cottages' tiny garden after the builders added a 'stoep' (but messed up the garden in the process), and also helped to pick two almond orchards and peel off the outer husks.


Ruth's Cottage's new garden. We stayed in this cottage a few nights too. 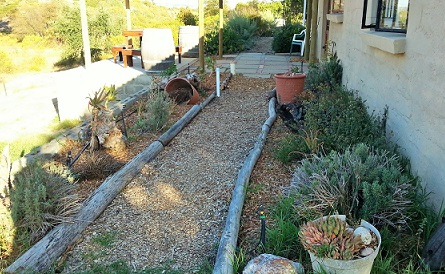 Manually picking almonds. The boys and mom did the lower branches, while dad and I did the higher ones. The topmost ones we hit with a stick. 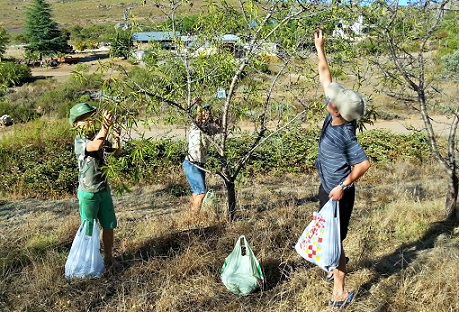 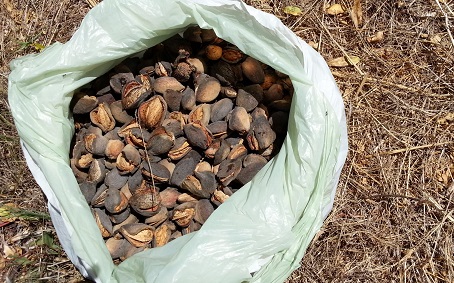 The 'peeling factory', on the 'stoep'. 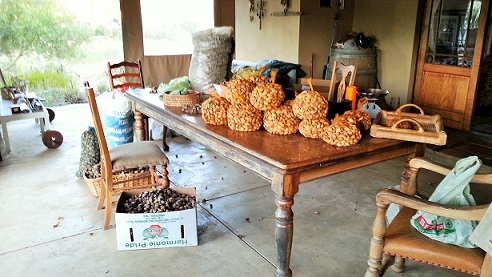 Generally we did volunteering work in the mornings, and after lunch with them had our own time in the afternoons. We had some school and other computer-work to do though, so we kind of took over their dining table some afternoons... 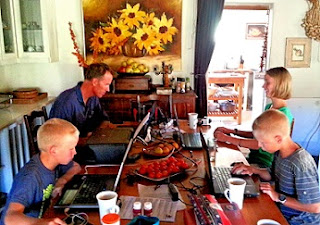 It wasn't all work though. After fixing up some bicycles, the boys had a lot of fun riding around the farm, and I took plenty of pictures just for fun. 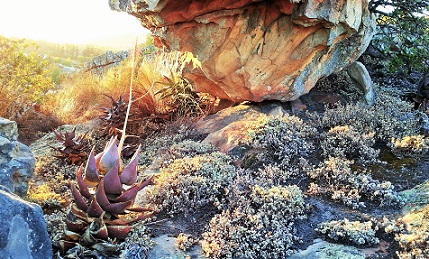 They had a whole lot of piglets. One of them was an escape master, which we chased around the farm the first day. 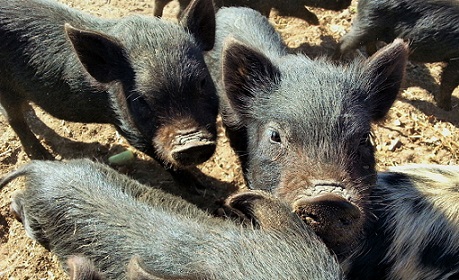 Their youngest son Casey who's studying in Cape Town also took us on a sunset outing when he came home one weekend. We had a magnificent view of the whole area. 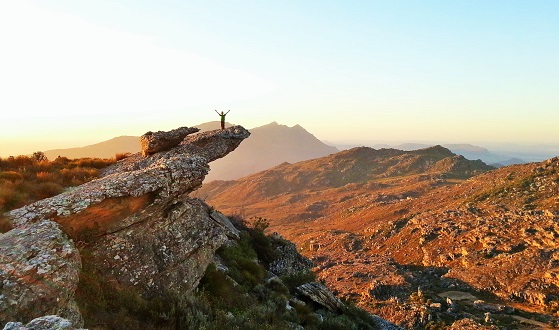 Just like 'dassies' in the sun with other volunteers and guests. 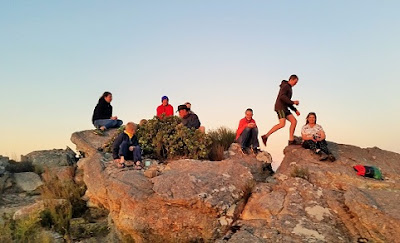 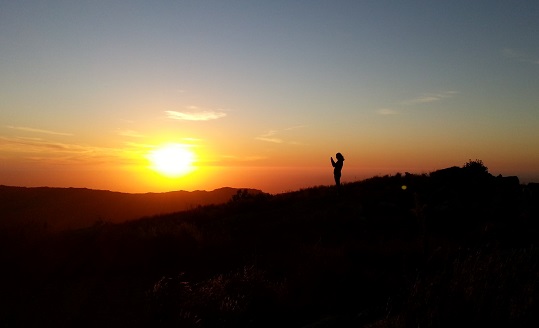 Enthusiastic company on my evening walks... Thanks for reading! 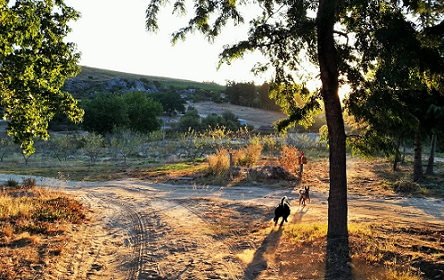