Our Version of Homeschooling

So you know we homeschool, but did I mention we farmschool as well? Living on a farm, there are so many things to see and life experiences abound. Here follows what we've been doing 'school' wise lately...

My mom loves planning, and accordingly has formed a rough (changeable) plan for all our academical work until Grade 12 - quite an accomplishment considering we were still preschool then. But because we are now Grades 3, 6 and 9, the plan has adapted a bit and things are getting more individual-focused. At present we do an eclectic curriculum, and we know what we have to do every week to finish our term's work on time. We all have Afrikaans and English languages, Maths, Science, Biology, History and Geography, Economics and we can develop our personal interest area as well. We still follow our routine of having 2 months school, and then 1 month holiday to have time for all the fun learning! 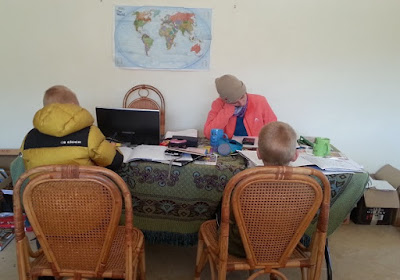 Besides academical work, a lot of things happen which would not normally be classified as 'school', but definitely qualifies as learning (which is school's real purpose after all). With two very creative, dynamic brothers in the house, it doesn't take long for bottles of suspicious looking liquid to appear, lengths and lengths of baling twine end up under beds and in the corridor, and a miniature candy floss machine becoming the coolest thing ever. 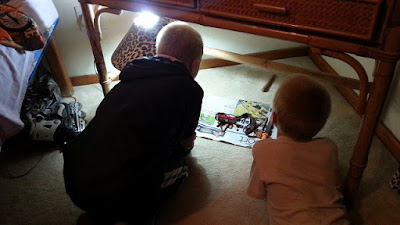 Because everyone has a certain day of the week on which all food/cooking is their responsibility (that's Life Skills), we've had some interesting things happen in (and around) the kitchen...


Funny as this picture is, Maarten had an ingenious idea actually - he was cutting onions, had enough of burning eyes, and so decided to wear sunglasses to stop the chemicals from reaching his eyes. 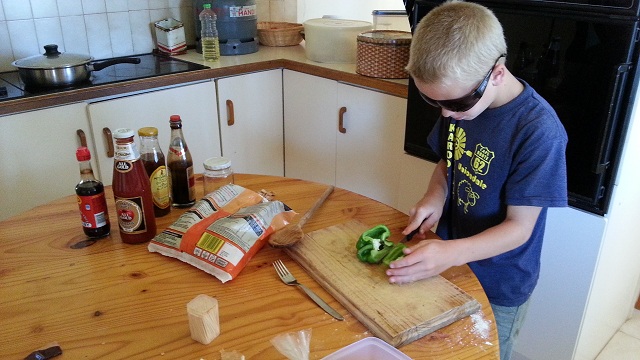 A while ago Maarten was obsessed with how to 'survive in the wild' - he read books about it (even wrote his own little booklet all about Practical Survival Tips), and then of course had to try out some of the recipes.... Lunch was roots, leaves, and Cat's Tail.  He collected them himself, washed and cut it all himself and prepared it for us - all based on information he found in a book on Survival.  It didn't all work out the way he thought is should have, as wild roots of Cat's Tail do not cook soft in an hour only (warning: do not try at home unless you can identify the plants specifically, if you do don't blame me if someone is poisoned). 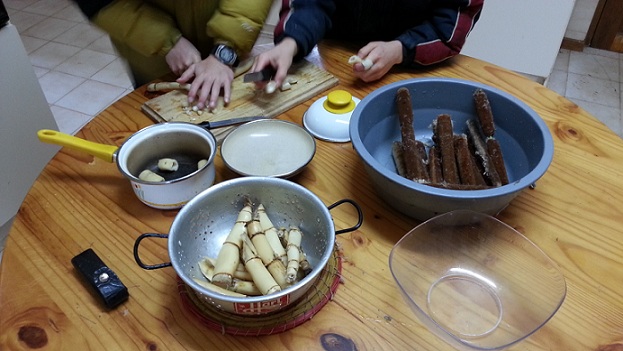 They pulled the soft seeds out and added it to dough - the resulting (hairy) flapjacks was not too bad. 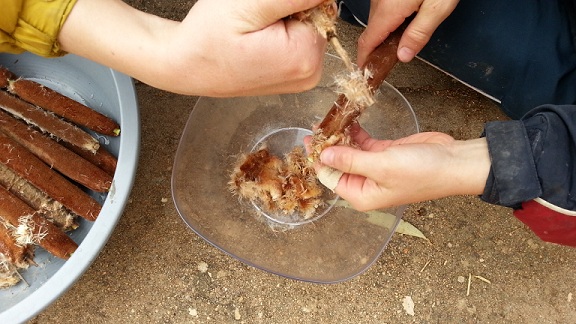 The 'sun oven' we borrowed from the local farm school - the boys baked a miniature bread as well as boiling some carrots. It took the whole day though. 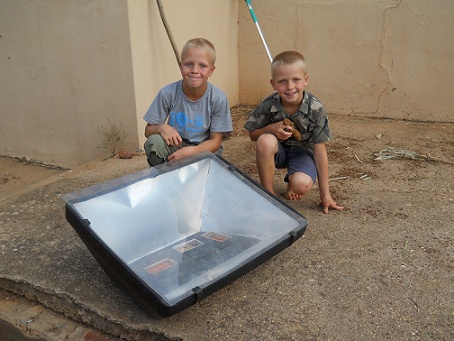 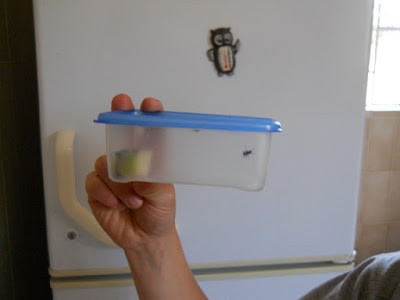 On the topic of insects....


They also made a gnat catcher as well as an ant attractor. I don't how how, I only discovered this picture later on (I do know they get a lot of ideas from this guy). 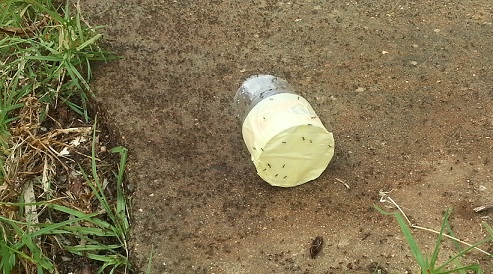 After the local pomegranate harvest, we picked a few to show the boys what it is. Maarten found out why a pomegranate is called a 'granaat' in Afrikaans. Literally translated back to English, it's a 'grenade'. Needless to say, it exploded. 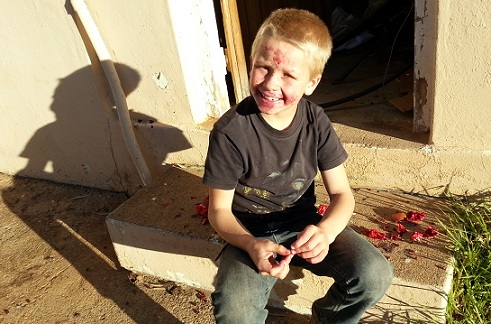 Maarten's candy floss machine. It proved to be quite a skill catching the floss. 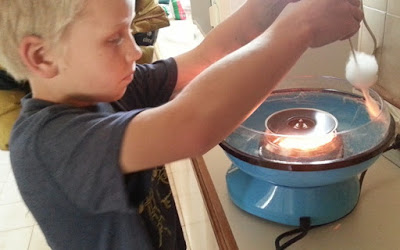 Part of school is also the making of stuff - kites, whips, catapults, etc. Maarten is often found designing some new 'invention', and his brother eagerly helps him build it.


The first major project was the building of a very big kite for 'kitesurfing'. Steelbags, duct tape and baling twine were used, and then they waited for a windy day. 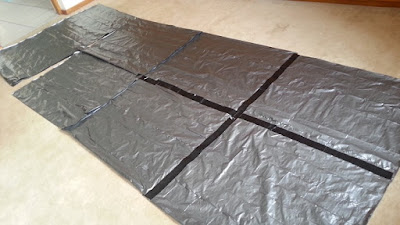 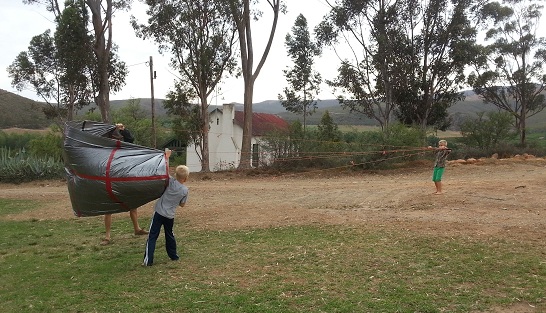 But the kite didn't stay in the air long enough to fly. Maybe he'll try again after learning some physics in the future... 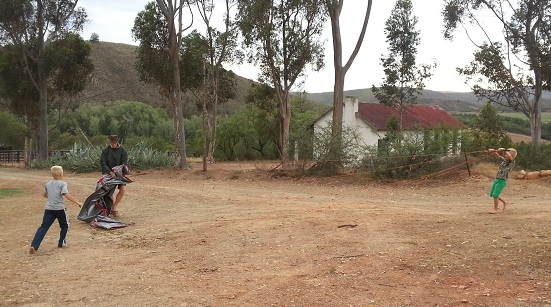 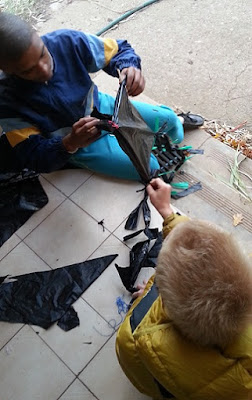 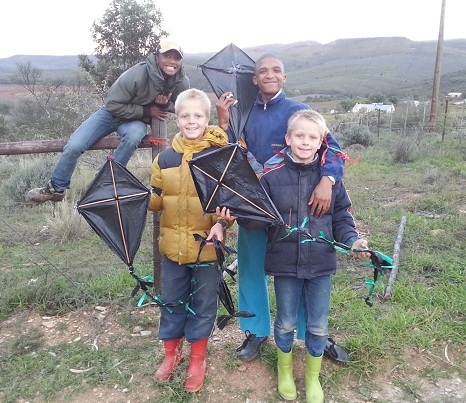 Next was a catapult built from a rusk box. It worked well, and the cat was chasing flying pieces of crumpled paper for quite a while. 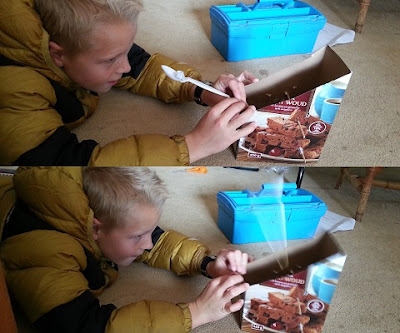 Also instructed by Breyton, they both made whips (once again from very handy baling twine). 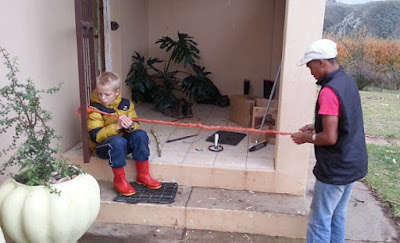 We also have astronomy... 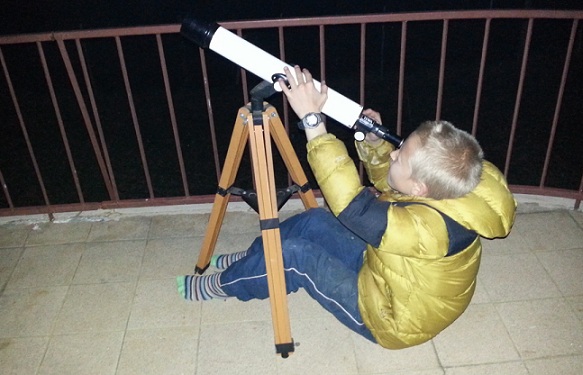 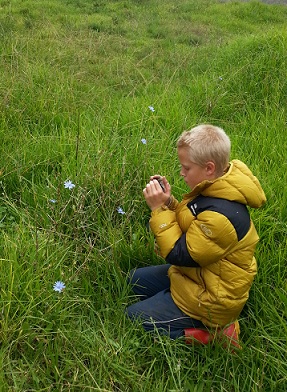 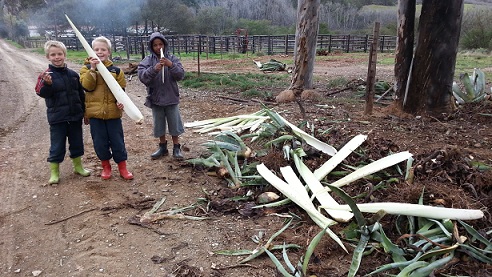 For the love of learning - even our cat loves our schoolbooks! 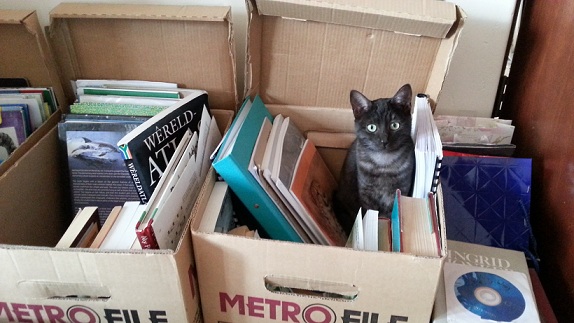