Farewell To Some More Piglets

Farming with animals requires constant care and the boys have learnt that lesson well. There is not a day that you can think of not feeding them, or just ignoring them when you want to sleep a little late...  Animals are hard work and require commitment! This was one of the reasons my parents allowed the boys to have the pigs as part of this adventure on the farm - to learn what it takes to care for animals (it is fun and easy the first few weeks, however as the months passed it got tiring), to learn the value of hard work for money (especially if the chore is not so much fun after all), to take the risk of plans not working out (as we discovered in the process of selling the pigs) and to learn that working in a team helps motvation (when the one can help the other when it just gets too much).

Our other five piglets (the 3 Minions, Plum, and Fig) have been eating, sleeping, and growing quietly, but the time has run out age-wise for the oldest three – boars has to be slaughtered before a certain age, otherwise hormones are released into the muscles and the resulting meat is not recommendable. As a result it has been piglet-catching time again, and ‘tannie’ Marina from Uniondale fetched 2 of the Minions for slaugther.  The good thing is that the remaining three are suddenly much less effort than the seven together!

As they were smaller than the previous Ham and Bacon, they were much easier to catch and load. 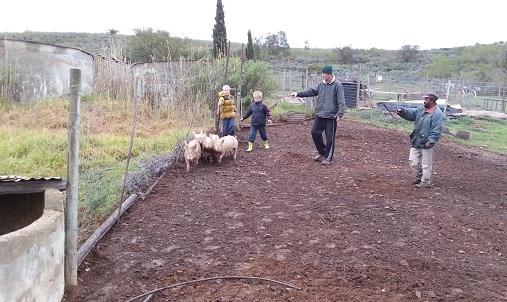 They simply grabbed them by the hind legs and pulled them to the 'bakkie'. 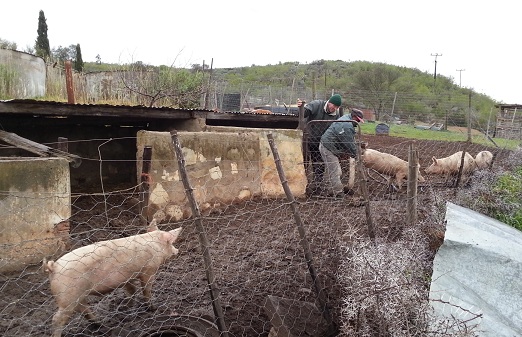 Out the gate (the crucial part where everyone is yelling advice and piglet screaming our ears off). Then they picked them up by the ears and hauled them onto the back of the bakkie - squealing the whole way (my mom is laughing). 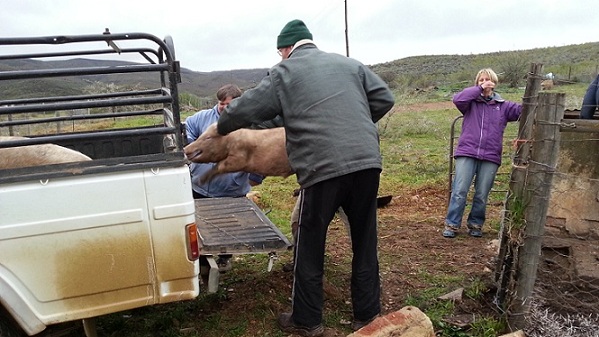 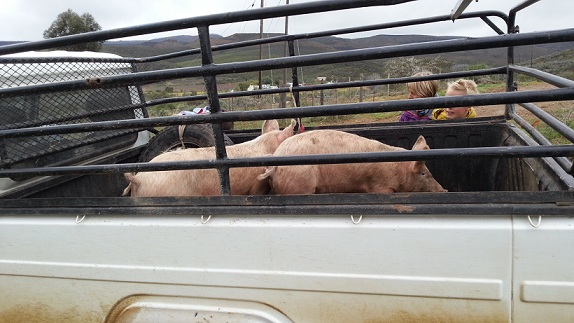