This post deals with a very interesting outing that me, my mom and brothers went on, to LANKO Apple Warehouse in Louterwater, the Langkloof.

Lanko's producers (the apple and pear farmers) bring the fruit in large wooden crates and the whole truck is weighed. After the crates are unloaded the truck is weighed again, and the total weight of apples is worked out. The crates of apples go through a chlorine treatment process and then the crates are packed directly into giant cooling rooms where they are cooled as quickly as possible to around 0° Celsius. 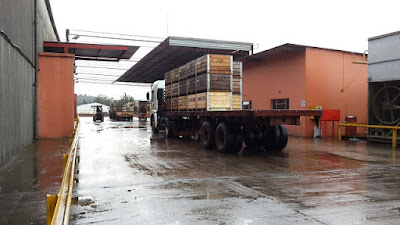 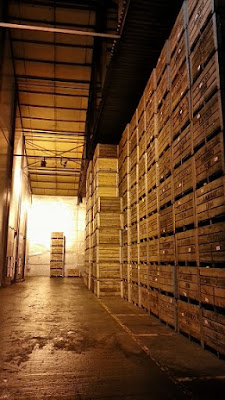 The cooling rooms hold between 1,000 and 1,700 crates, and are sometimes stacked up to 10 crates high (special permission must be obtained for at OHSA (Occupational Health and Safety Act) for this though, as the law only allows up to 8 crates high). Depending on demand, the fruit is then either directly packaged, or can be stored in specially sealed cold rooms for months.


Once a coldroom is filled up and the doors closed, the oxygen and carbon dioxide is pumped out while nitrogen is pumped in, causing the fruit to go into a state of dormancy. Probes inside the rooms monitor levels of oxygen, carbon dioxide, ammonia and ethylene (the hormone that apples/pears release as it ripens). 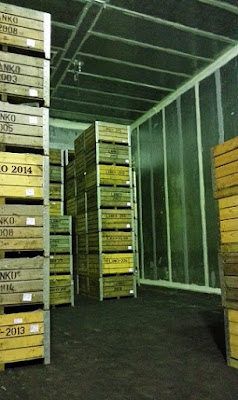 Us with the manager who showed us around, in front of a sealed room.(notice the height of the door) 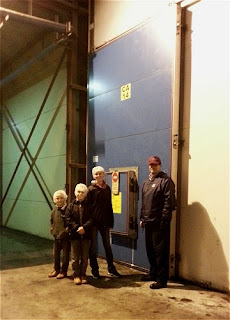 If there is enough demand for apples, a sealed room will be opened up, but only after 24 hours have past it will be safe to work in.  Once safe, the crates are removed with forklifts and are taken to the packaging 'factory'.

A large machine with arms pick up the crates and lower it in water while tipping over the crate. All the apples tumble out into the water and begin drifting down the 'canal'. Water is used to transport the apples because 1) apples float in water and 2) it's the softest way of transportation ! 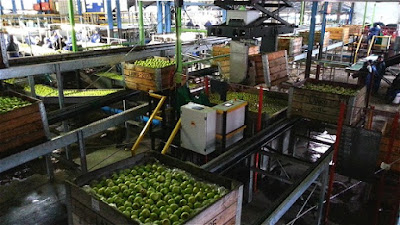 Picking the crate up... 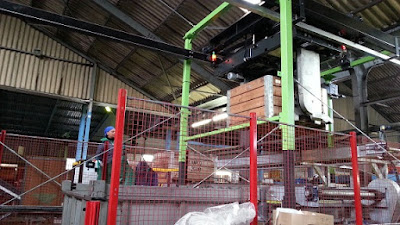 ..and tipping it all out. 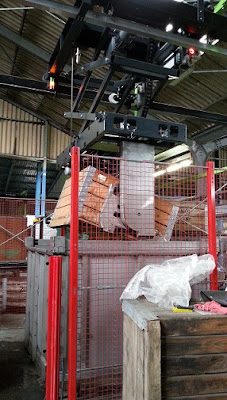 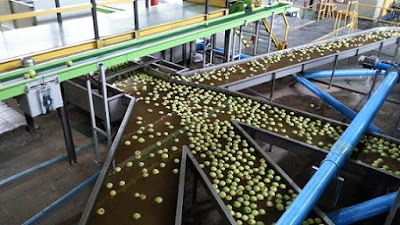 The apples then hit than the first bunch of rollers where workers manually sort the fruit according to class - class 1 and class 2. These 2 classes then continue drifting downstream (in different canals) to the drying machine. 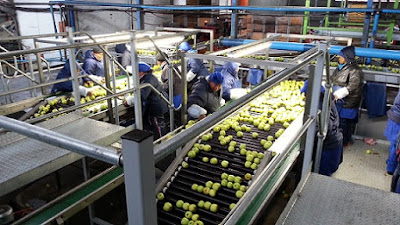 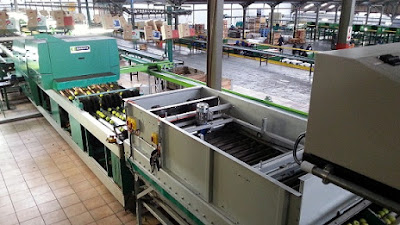 After being dried and seperated on conveyor belts, it goes through a box in which small cameras take about 10-12 photos per apple, and sort the apples according to color percentages.

Then small, separate, transporting 'teaspoons' scoop up the apples one by one, weigh them and sort them according to size. The different sizes of apples are placed at different stations where workers pack apples into boxes by hand. If workers find any apples that they think should be class 2, it's sent back on a small conveyor belt to the start of the process. 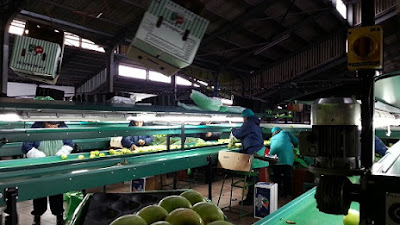 Different class, size and color apples are packed in different color boxes, and the packer write her/his number on the box. They are paid per 100 apples, not per box as the packers who pack bigger apples (and therefore less apples per box) would then be at a disadvantage. 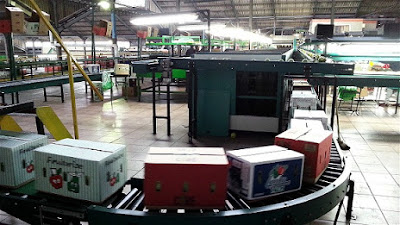 The boxes are weighed (because in the end they sell by weight), and stacked on pallets. 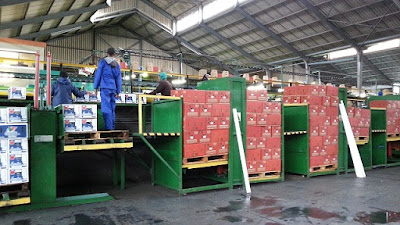 Each palette then gets a sticker with information such as which warehouse it comes from, from what farmer, the day it was packed, the type of apple and what class it is in a code.


Packed apples being put into cold rooms until trucks come to transport them. 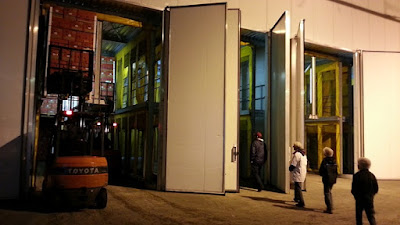 The pallets are then strengthened, and ready to be moved. Thanks to some incredible planning, cool processes and hard work in such a warehouse, apples are available to the general public all year round.


Apples directly from the trees - although the picking season is over, there were still a few apples hanging on trees here and there, so we ended the trip with crispy fresh apples directly off a tree! 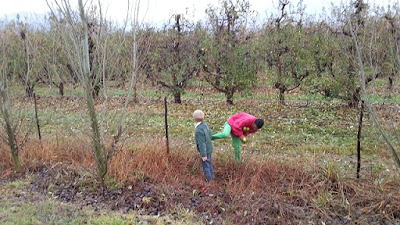