Almost halfway into May, there has been a few lessons learned in the business world... Refer back to my post on the start of these projects here. To recap, the idea was to give us a hands-on experience in the world of running your own business. My brothers chose to raise piglets and sell them again, and I had a few chickens to sell the eggs. What we learned however, is that what makes perfect sense on paper and spreadsheets, doesn't always work out the way you want it to in the real world.

By the end of March I could already see the chickens were not laying nearly enough eggs for me to be able to make a profit.  So we gave them another month to see whether there will be any changes using the eggs we got now and then, in our own household. Unfortunately one of the hens turned into falcon-breakfast, and I began doubting whether we should keep them at all for the 1 or 2 eggs they supplied now and then... To confirm my doubts, another chicken died rather mysteriously a few weeks later (it was probably a snake). That was the last straw, so we decided to stop the egg business and after a sad chicken funeral, the remaining 8 were caught and given away.

The piglets have fared a little better so far. In total there are 7 of them, the oldest two will be soon be 5 months old and should be ready for slaughter. They haven't grown as fast as desired though so maybe we'll give them another few weeks... 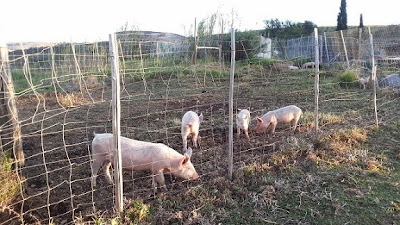 As with all animals there were ranking issues, and the little ones got some nasty bites; as a result we still have to keep them apart. 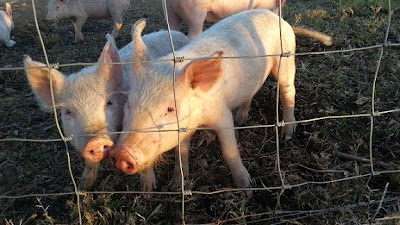 Every meal, before the boys may eat, their piglets have to be cared for first. 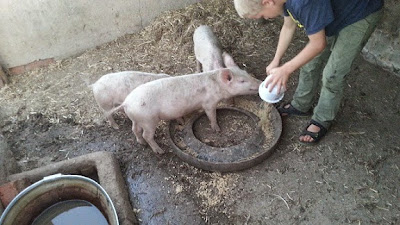 With the money they plan to make, comes the cleaning of stinky pigsties. 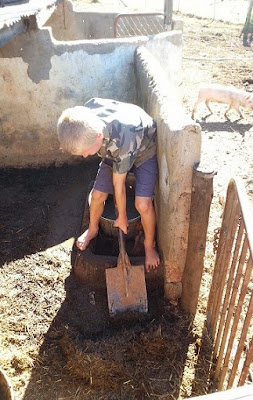 While researching, the boys came across a very handy formula for determining a pig's weight with only the measurements of his length and girth. Since then, every time the pigs has to be measured (to check progress and if they are growing fast enough) it proved very entertaining. 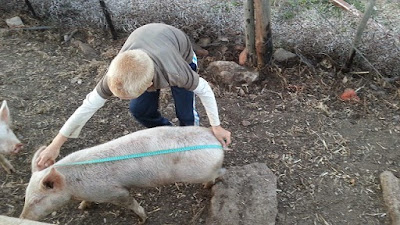 Girth. Bacon and Ham are easier, since they stand still while eating and are rather tame. 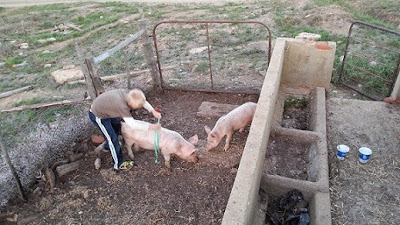 The rest refuse to stand quietly. 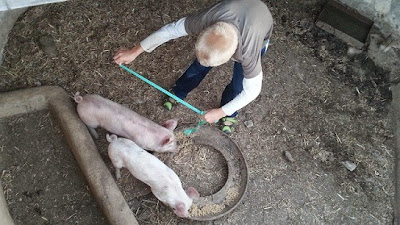 What would we do without our helpers - thank you Brendon and Breyton.
Notice the piglet's face though. He's screaming for life and death! (no wonder there is an Afrikaans expression stating: 'Jy skree soos 'n maer varkie!' (you scream like a piglet)) 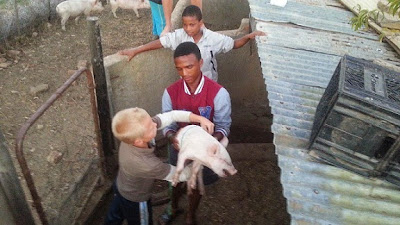