Through Devil’s Chimney to The Hell

Our first weekend on St. Ancothesa farm was very exciting as we drove to surrounding tourist attractions and slept over at a very hot place: The Hell. It  included perilous roads, narrow caves and ostriches. Here’s what we did....

Saturday the 13th we were off towards an area famous for its ostriches; Oudtshoorn and surroundings. We stopped at one of many ostrich farms and was just in time for a tour.

Most of the ostrich eggs are incubated by machines, and the newborn chicks are kept indoors in crates for the first 3 days; baby ostriches doesn’t have to eat or drink for the first 3 days of their life! They are then transferred to ostrich couples outside who are too stupid to tell them apart from their own chicks; their brains weight about 40g, versus one of their eyes weighing 60g!

One day old chicks. Their feathers are still hard from the egg yolk. 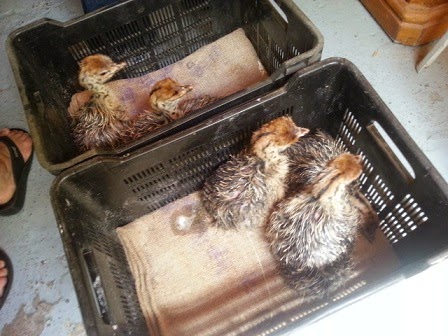 Our funny guide with Betsy, a very greedy ostrich. 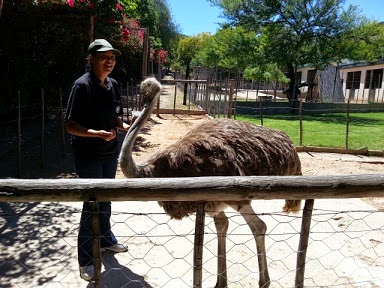 We had opportunities to feed them, ride them, stand on their eggs, and even get a neck massage from them (it was more like an ear massage). A fellow tourist even got a kiss from an ostrich.

Maarten all fluffed up. 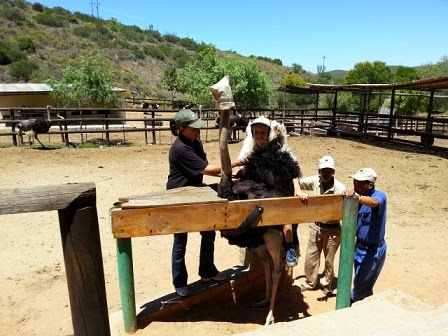 Theuns on the incredibly  strong eggs. 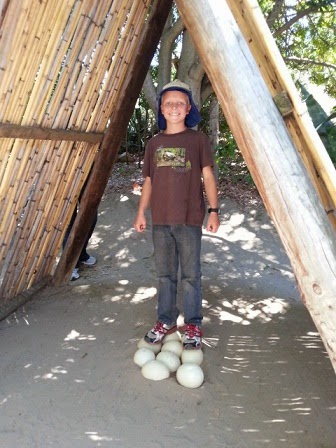 A hilarious video of my mom riding an ostrich. Me and dad did as well, but mom took the trophy with her screams.
https://drive.google.com/file/d/0B-oW9Zr9nY6cdFpvOW5NaUlKTTg/view?usp=sharing


Next, we visited The Cango Caves. Mom, Theuns and me did the Adventure Tour while Maarten and dad did the Heritage Tour. The first caverns were massive and well lit; I could take a few pictures. Our tour group was a bit too big (over 40 people) and we felt that the whole setup was very commercialized; the stone was slick from all the thousands of people who’ve walked and touched it. It was still exciting though; we went through 3 narrow spaces; The Tunnel of Love, Devil’s Chimney, and The Postbox. Everyone survived, despite some spaces being only 40cm high.

A person for perspective. 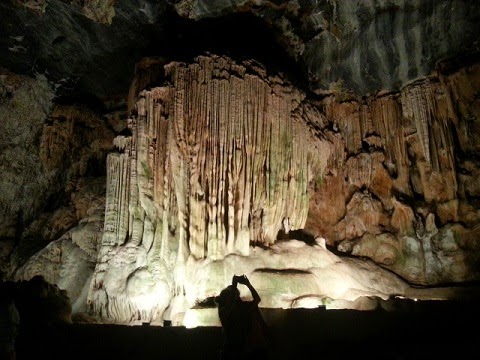 Theuns with a stalagmite. 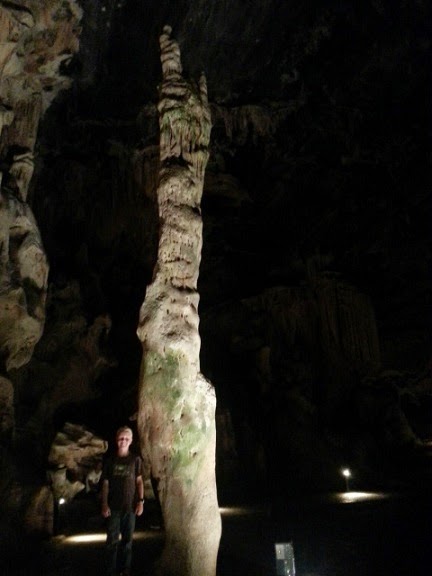 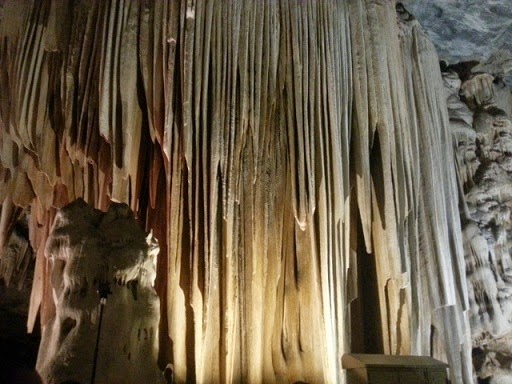 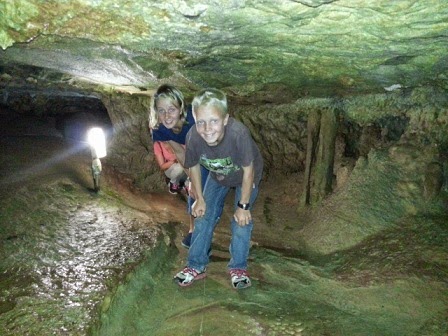 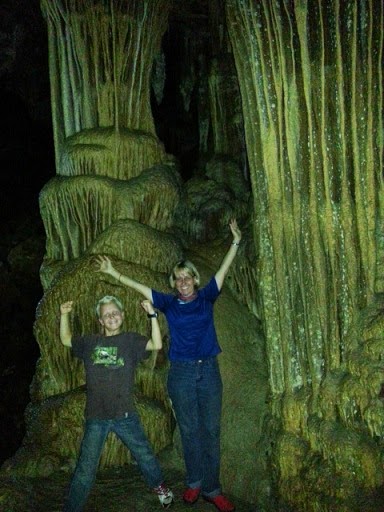 After this, we tackled the Swartberg Pass; a high pass over the Swartberg mountains with a beautiful view from the top. We gained a lot of respect for the engineers Thomas Bain and his father Andrew with their teams of bandits, who built it in the 1900s. 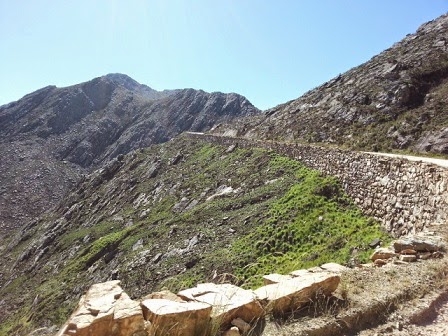 Finally, we were on our way to The Hell. 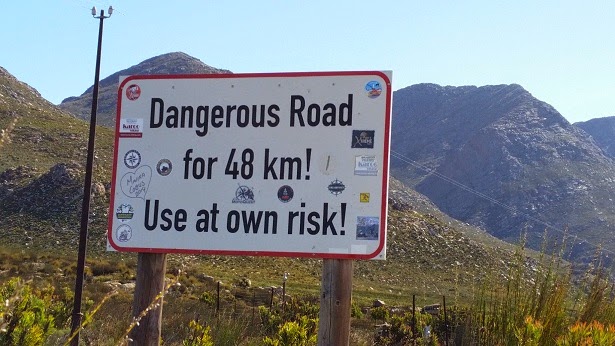 Gamkaskloof, or “The Hell”, is a beautiful valley in the Swartberg mountains. The name has nothing to do with the place, it is a lush paradise. The name comes from the road, which some inspector had to travel often to get to the isolated community there. When asked how his journey was, he usually replied “like hell”. You drive approx. 2 hours on 40km, and experience some serious adrenalin rushes on the way.

Beautiful proteas along the way. 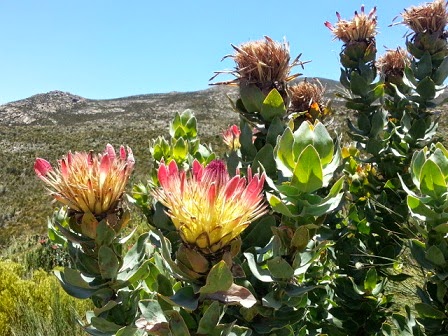 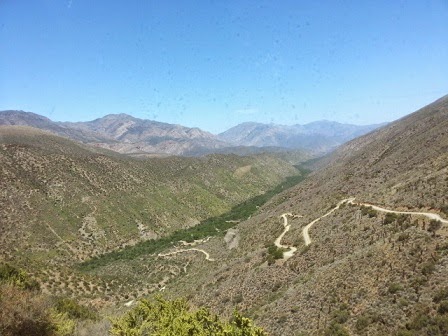 Once there, we were served a traditional hot plate of “boerekos”, and slept over in our 2 little hiking tents. The next day we drove to the tourist centre (through a river) and bought T-shirts and hats, as we realized this was one of the things you don’t do often and therefore we had to “been there, done that, and bought the T-shirt”. On the way there were a couple of restored houses where farmers had lived who were part of the close community. Most of the valley and the surrounding area is now a nature reserve. 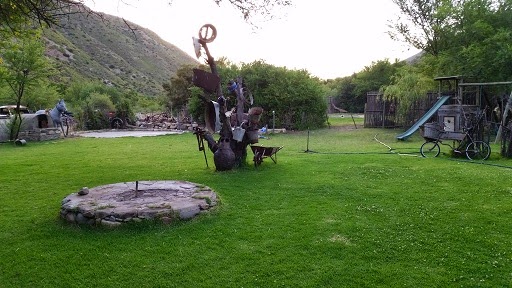 Picturesque, as well as celebrating that we made it. 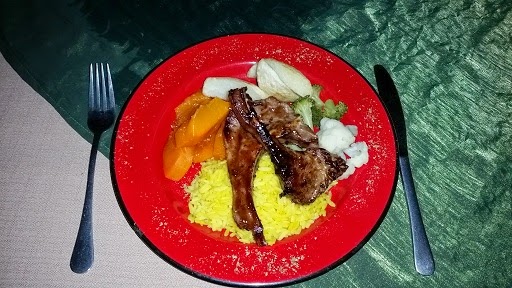 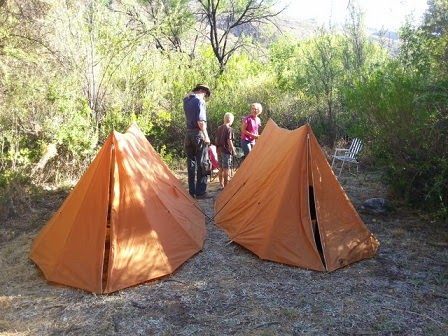 The Gamkasriver we had to cross to get to the tourist centre (not a very tourist friendly outline of the valley). 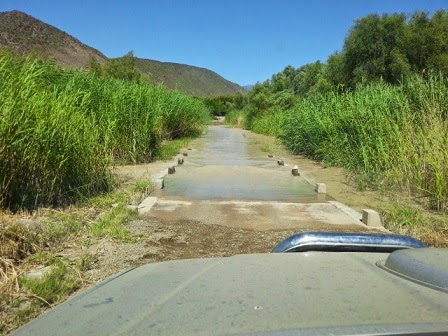 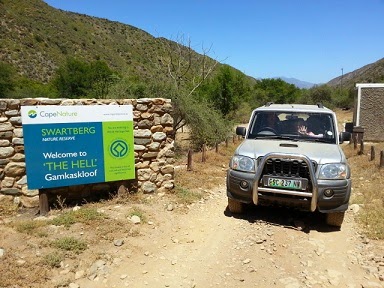 A lovely old restored house to rent... In The Hell. 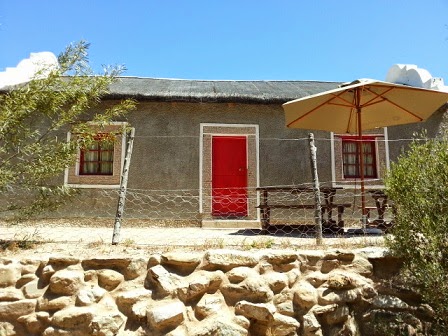 The next day, we drove back to St. Ancothesa via Prince Albert, Meirings Poort, De Rust and Uniondale. We stopped at a beautiful (as well as overcrowded) natural swimming pool and waterfall through Meirings Poort.

Down on the other side of Swartberg Pass. 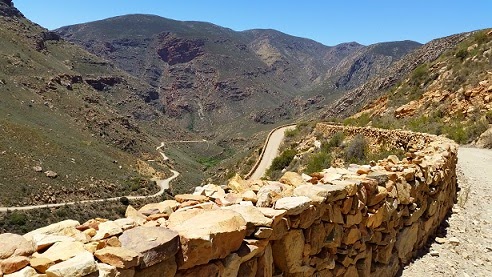 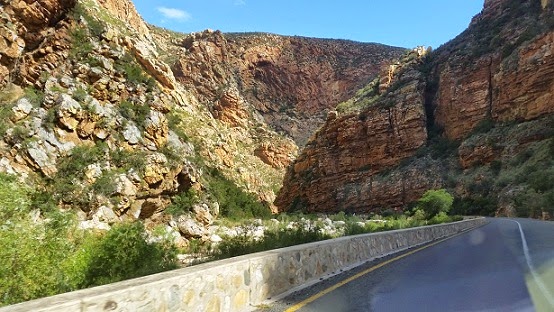 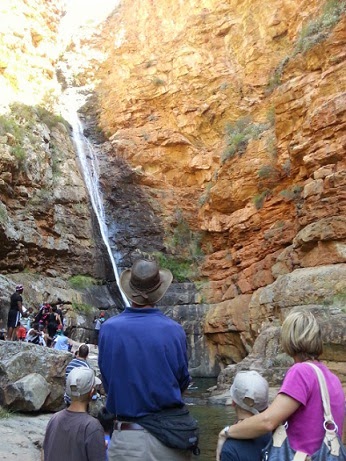